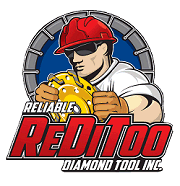 I began my career in the construction field as a Concrete Cutting Technician in 1979. After honing my skills as a Core Drill Operator, I then went on to become the third highest paid Wall Saw Operator in the state of California, in the Concrete Coring Company chain of offices. Then I spent eighteen years as an industrial diamond tool sales representative and Sales Manager. Eventually, I had the opportunity to become a sole source agent for the worlds most advanced diamond tool manufacturer and so, in 2000, I decided to build a diamond tool manufacturing/distribution company here in Phoenix Arizona and named the company Reliable Diamond Tool, Inc.

Thought Process for the Introduction of the Beveled Edge Disc (B.E.D.) System

Having been exposed to various cutting, drilling, grinding, grooving and demolition processes as an end user and sales representative throughout my career, I was always fascinated with the process of grinding concrete and then polishing it to a high luster. My past observations of this process were as follows; when the machinery was doing the work, it was always vibrating and chattering as it ground through the concrete in the initial preparation stages of the polishing process. I observed that the available "diamond plugs" were structured as a flat surface tool actually slamming/impacting the raised joints and aggregates protruding from the concrete. This flat surface design caused spawling and aggregate pullout. The edges of the joints and the diamond plugs were of particular concern to me because the current tools doing the work caused the joint edges of material being ground and the diamond plugs as well, to spawl and to chip, which was not the desired outcome.

Early in 2003, I began to develop a design with the metallurgists at the manufacturing plant. My thought process was to attempt to come up with a tool that could easily crawl up and over high joints, ridges or exposed aggregates and not cause the damage that the flat surfaced diamond plug tool caused. After I sketched many trial drawings and we collaboratively made numerous changes to the product back and forth, I decided that we finally had a trial design, at least on paper. I requested that the factory produce a set of 12 sample discs and when they arrived I was more than pleased with the actual product design versus the drawings.

Implementation/Introduction of the B.E.D. System

I decided to give the first set of 12 to a concrete preparation company here in Phoenix. The operators of the machinery and I went out to a jobsite here in town and set up the machine to grind pre-scarified concrete, which is an formidable task due to the fact that the concrete surface was very, very rough. The operator started the machine and within a minute he stopped the machine, tipped it back, looked at the Beveled Edge Disc System (B.E.D.), and then set the machine back down and began again. He repeated this process three times and finally I asked him what his concern was. With a puzzled look on his face he simply stated that the machine was running so smooth and vibration free, that he was concerned that the B.E.D.s were not doing anything. I assured him that the diamond B.E.D. System was indeed doing what it was meant to do and I suggested that he continue. He did, and not only did the product grind smoothly and vibration free, but it also ground faster than anything they had used or tried before.

Then, I decided to fine tune additional specifications in order to grind varying ages and compressive strengths of concrete. Reliable Diamond Tool, Inc. now has eleven different fine tuned specifications and six various diamond grit sizes to execute faster and smoother and then even smoother steps of grinding the concrete leading to the polishing process. This discovery then led to the development of the B.E.D. polishing system, but that’s another story and I want to concentrate on the concrete grinding system for the purpose of this submission.

When we showed the B.E.D. to various contractors who utilized such tools, they would take the tool in their hand, take one look at it and not want to give it back. They were as excited at the prospect of the new design as we were and they would literally sit up on the edge of their seat and ask if they could "acquire" the product for immediate use. The response has been very positive from the very first day the system was introduced and remains the preferred tool of Concrete and Terrazzo grinding contractors today.

Results of the B.E.D. System

The results have been extremely positive and the B.E.D. System is in high demand. We have discovered that the B.E.D. system causes less vibration, less aggregate pull out, no spawling, no chipping and extends the life of the bushings and the bearings of the grinding machine due to less vibration. In turn, by utilizing the fine tuned specifications we have also noted a decrease in labor times and the amount of diamond plug and tool expenditures.

Reliable Diamond Tool, Inc. is proud of the new design and extremely happy to have been able to provide their customers with such a high end product that has helped to make their work easier and more cost effective.

Serving the industry for over 35 years.There's a reason why Reliable is in our name.